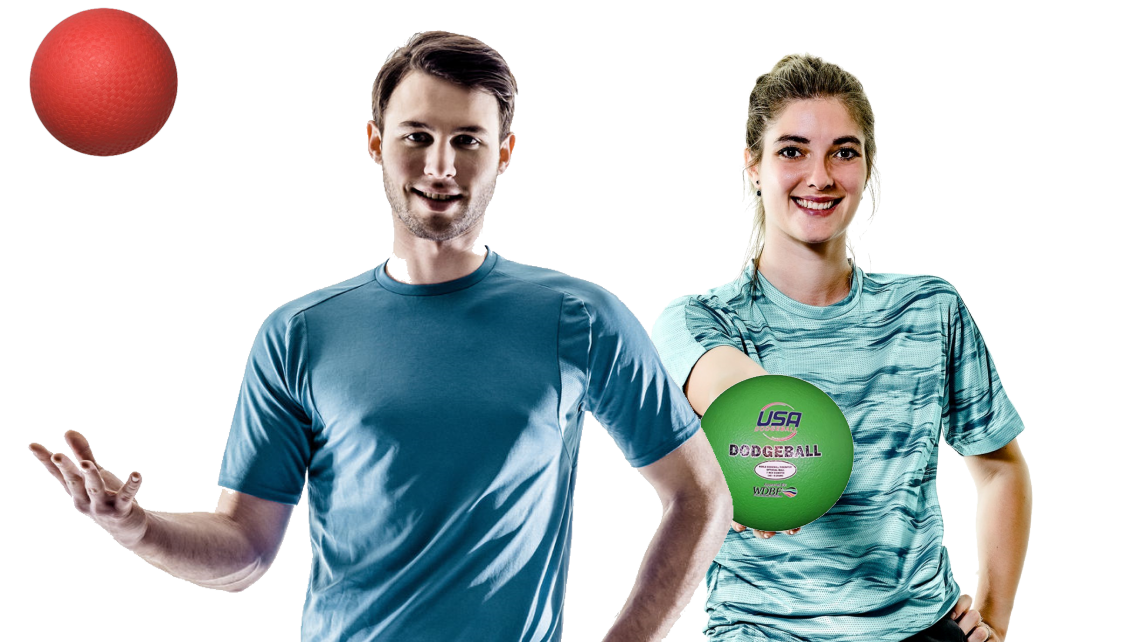 Dodgeball is a sport that has yet to be standardized worldwide and there are various types of dodgeballs used by various organizations and regions. Many regions and leagues have established preferences for dodgeball ball types based on initial and prior uses, complicating efforts to standardize the game. However, there are advantages to different ball types, as dodgeballs can be tailored for use with specific groups, ages, leagues, tournaments and settings. 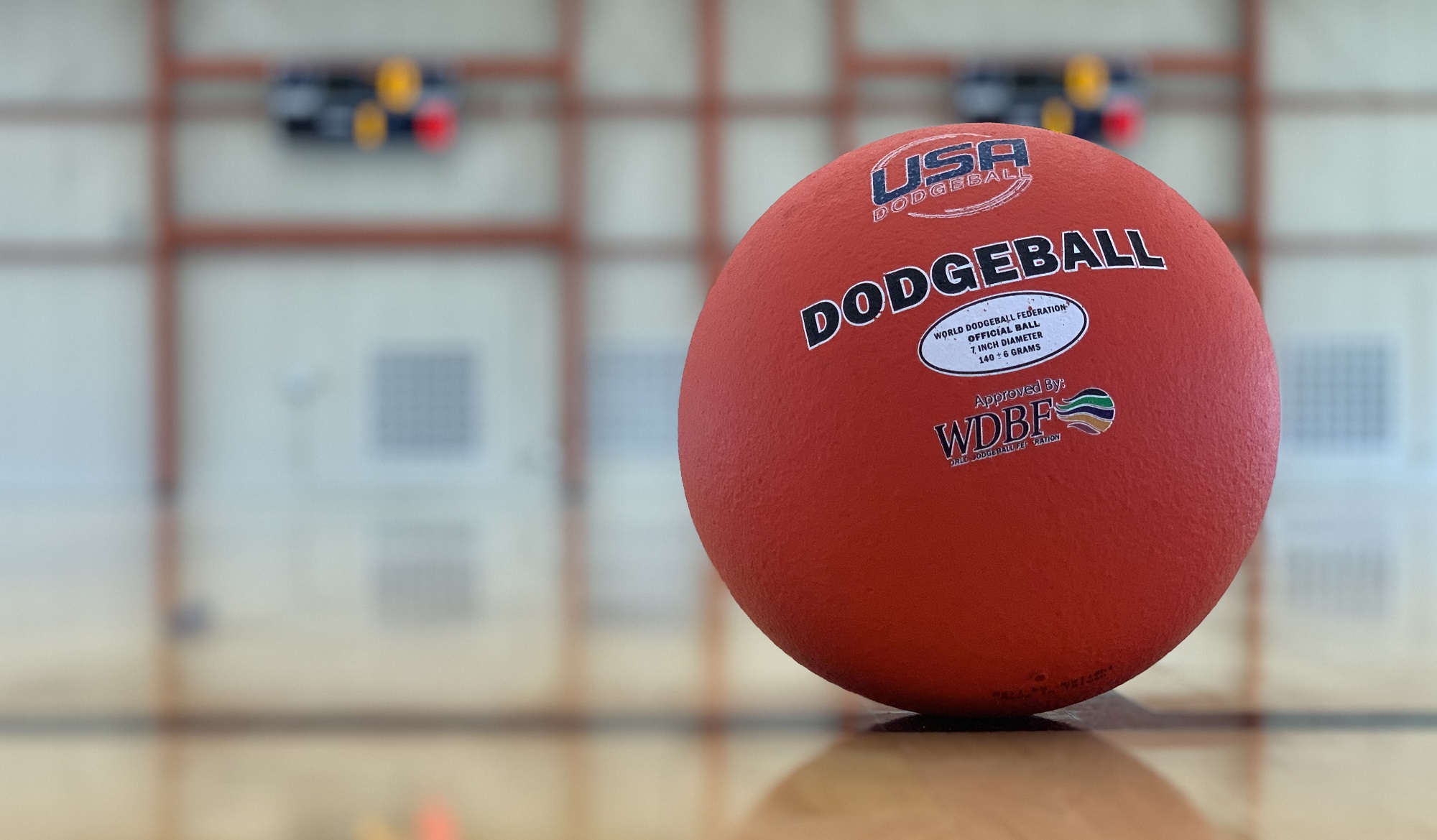 Major League Dodgeball (MLD) uses the WDBF 7-inch foam dodgeballs for all events. MLD believes that 7-inch foam dodgeballs provide the most exciting and fast-paced game play.  In our experience, the WDBF balls, at approximately 140 grams in weight, are the perfect size and weight for top competitive play. The balls do not “tail off” when thrown, and fly straight unless the thrower deliberately puts a spin or curve on the balls. The WDBF dodgeballs can be ordered at Amazon.com.

Gator Skin dodgeballs are best for leagues due to their durability.

There are several brands of 7-inch foam dodgeballs in addition to the WDBF dodgeballs. 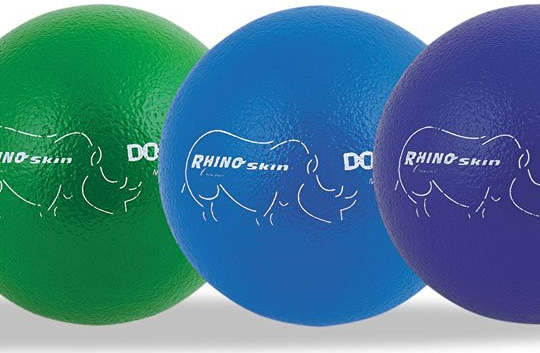 Rhino Skin 7-inch dodgeballs are also a good alternative. The balls do fly a little truer than the gator skin dodgeballs, however the coating does not last as long as the S&S Worldwide balls.

Gopher Sports foam dodgeballs are nice when brand new, but they tend to wear out quickly in our experience.

Gopher Sports has a variety of foam dodgeballs, including ClassicCoat National Dodgeball League (NDL) 7-inch Dodgeballs. Though the NDL is mostly defunct, the balls are still being marketed. In our experience, these balls feel a little lighter (too light) and often will tail to the ground. The coating also feels inferior and even the “premium” DuraCoat Dodgeballs have an inferior finish in our opinion.

Several years ago, Gopher Sports marketed a 7-inch SuperBounce foam dodgeball at approximately 180 grams. Elite Dodgeball initially used these balls for the foam divisions at some meets. While the balls were a favorite with some players because they could be super accurate when thrown, the balls were actually somewhat dangerous as they resulted in some finger breaks and sprains. The SuperBounce balls do not appear to be marketed by Gopher Sports at this time.

For many players, there is only one true, official dodgeball of the game, and that is the 8.5-inch rubber dodgeball. The 8.5-inch dodgeballs made their mark in grade school for many players. It was the first, and best ball, for many. Indeed, the rubber dodgeballs have many attributes. The balls are cheap and durable. Easier to catch, these balls feel natural in the hands and on catches. The balls foster teamwork, and in the higher echelons of competition, encourage a slower, measured, strategy-based game. Acclaimed dodgeball organizer Mark Acomb built his popular Elite Dodgeball organization around this ball.

The heavier and larger 8.5-inch rubber dodgeballs are best enjoyed by male players. Though there are more than a few women dodgeballers who enjoy this ball, some women have commented the balls are too big for their smaller hands.

The rubber balls are basically school playground balls and can be found for purchase at many sporting goods stores. Online, rubber playground balls such as these Crown Sporting Goods Playground Balls can be purchased from Amazon. Mikasa markets the Mikasa Official Rubber Dodgeball – 8.5 inch, however, in our opinion, the balls feel larger than 8.5 inches and the material feels too thick and heavy. Moreover, the balls tend to lose their perfectly-round shape when fully inflated. Perhaps for these reasons, we rarely see the Mikasa balls used at dodgeball events.

Cloth dodgeballs have a loyal following and are the preferred dodgeball type in many regions of the world. Cloth dodgeballs are an officially sanctioned ball type of the WDBF. The balls are particularly popular in the United Kingdom and Europe, as well as some African and Asian countries including Pakistan and Malaysia. (The Malaysia Dodgeball Federation uses cloth dodgeballs while the Malaysian Association of Dodgeball uses 7-inch foam.) The cloth dodgeballs were largely unknown in the United States, though a San Diego dodgeball league once used cloth for several years and there are still a few California players familiar with the ball type.

In an effort to find common playing ground between N. American and European national dodgeball federations, a cloth division was introduced at the 2022 Dodgeball World Championships in Edmonton. The division proved to be popular and will likely spur more cloth play in N. America. Though several European nations dominated the cloth division at the world championships, the U.S. Men’s National Dodgeball Team did secure a 3rd place medal. The skill sets of the American team in 8.5 inch rubber dodgeball translated well to the larger cloth ball format.

Cloth dodgeballs are available at Amazon.com and at various European dodgeball websites including British Dodgeball.

One of the sport’s favorite dodgeballs, no-sting dodgeballs are used by many established recreational dodgeball leagues including WeHo Dodgeball, the World Dodgeball Society, Evergreen Dodgeball and Rec Social Sports to name a few.

The durable, 7-inch no-sting balls are rubber, but they are not a hard rubber like the 8.5 inch rubber dodgeballs. The balls have a thinner shell and are somewhat squishy. As a result, the balls are a little harder to throw and a little easier to catch. These attributes seem to level the playing field between weaker and stronger players. Women dodgeballers especially like the no-sting dodgeballs in our experience.

The no-sting dodgeballs are used more in social and recreational settings, however, USA Dodgeball includes a competitive no-sting division in their regional tournaments. Worldwide, the balls haven’t caught on as much as in the United States.

The balls are called no-sting, but that is not always the case. When thrown by the strongest players, these balls can leave a red mark and hurt feelings. However, the balls do not have the same impact as the 8.5 inch rubber dodgeballs as the softer shell is absorbed more easily on impact. 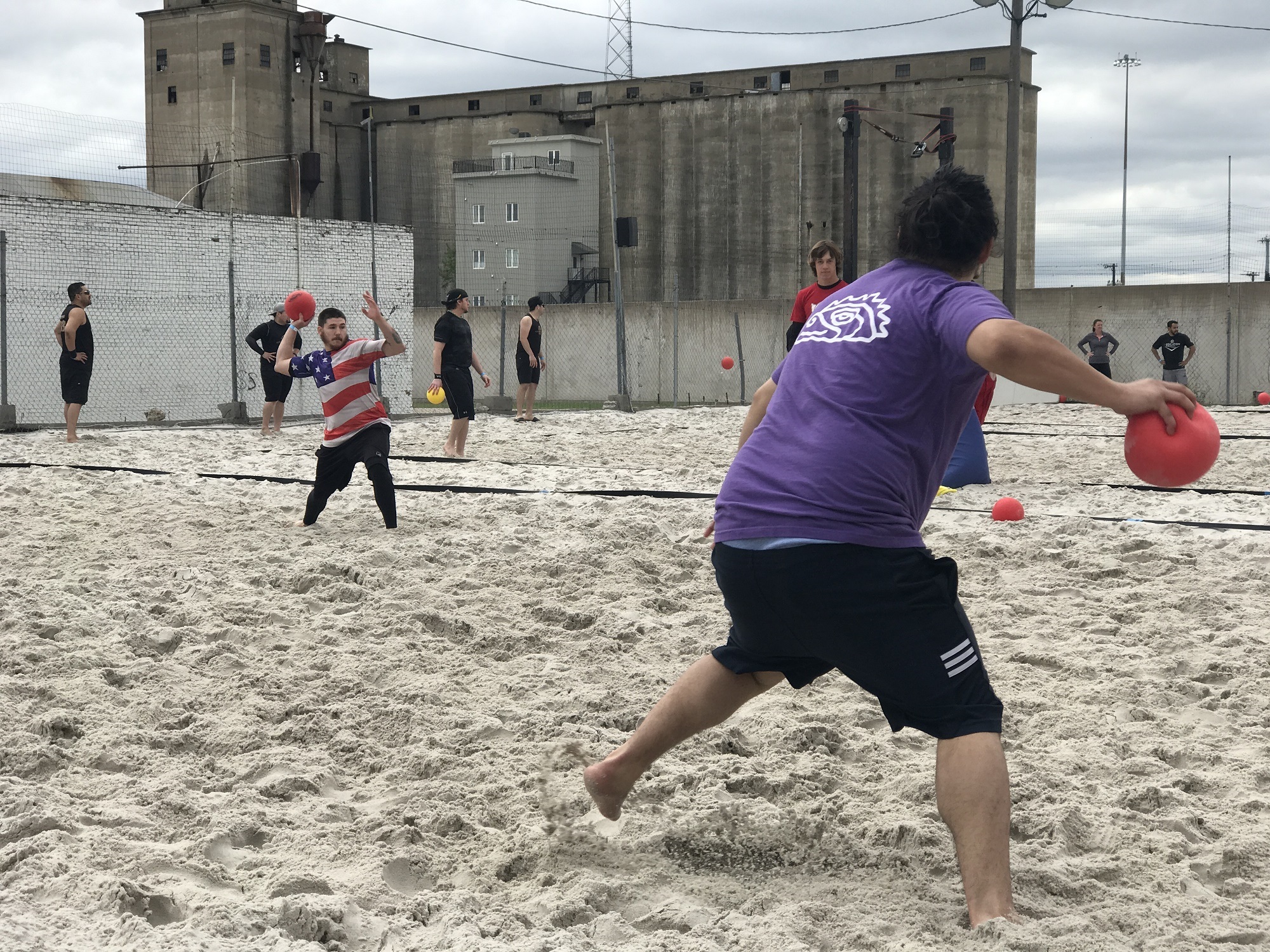 No-sting dodgeballs used at a sand tournament in Dallas.

These balls work especially well for beach and sand dodgeball tournaments as the balls do not absorb moisture like foam dodgeballs. Overall, if you are searching for a well-regarded and durable ball for your dodgeball league or tournament, you really can’t go wrong with no-sting.

No sting dodgeballs, such as these Go Sports 7-inch No Sting Balls, can be purchased at Amazon.com. The balls can also be found at the USA Dodgeball store.

6-Inch Foam: Smaller than 7-inch foam, these lightweight balls are best for ages 16 and under. You can really zing these balls and curve them if you have the skills. We sometimes see these balls used in charity-type adult tournaments as well.

4 and 5-inch Stingers: Small balls, often rubber, have been used in some leagues. The mostly defunct National Dodgeball League (NDL) included a stinger division at their annual world championships in Las Vegas. There is a league in Colorado that uses stingers too. Nevertheless, these balls are just too small for traditional dodgeball action, according to many players.